BOSTON – A Holliston man was arrested early Saturday morning in connection with his possession of a trove of weapons, ammunition and incendiary material, and his threats to use them.

Joseph Garguilo, 40, was charged in a criminal complaint with being a prohibited person in possession of ammunition.  Garguilo is scheduled to appear before U.S. District Court Magistrate Judge Jennifer C. Boal in Boston today at 2:30 p.m.

According to the charging documents, on July 27, 2016, the FBI received information Garguilo had recently acquired parts to make an AR-15 rifle, and he was stockpiling other weapons including tasers, mace guns, hunting knives and thermite (an incendiary).  Around the same time Garguilo allegedly stated that “he will plant a bomb in police station…and kill as many homeland security officers as he can before they kill him.”  The FBI then initiated an investigation.  In recent days, the FBI learned that Garguilo had stated that he wanted to attack a mosque and/or kill President Obama.  Garguilo also allegedly said he wanted to, “chain a mosque closed and burn it down.”  Garguilo did not mention any specific mosque or time for this attack. The FBI also learned that Garguilo was stockpiling food and water as part of his plan, and that an acquaintance of Garguilo’s believed he was “about to snap.” 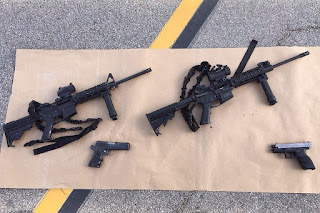 On Aug. 26, 2017, federal agents conducted a search of Garguilo’s residence and seized parts to assemble an AR-15 rifle, ammunition for the AR-15 rifle, nine millimeter ammunition, chemicals that could be combined to create incendiary or explosive compounds, and hand written notes threatening violent attacks against members of the Islamic faith.

As alleged in court documents, Garguilo is the subject of an active restraining order which prohibits him from possessing firearms and ammunition based upon a finding that “there is substantial likelihood of immediate danger of abuse…”

The charging statute provides a sentence of no greater than 10 years in prison, three years of supervised release and a fine of $250,000.  Actual sentences for federal crimes are typically less than the maximum penalties.  Sentences are imposed by a federal district court judge based upon the U.S. Sentencing Guidelines and other statutory factors.

The details contained in the charging documents are allegations.  The defendant is presumed to be innocent unless and until proven guilty beyond a reasonable doubt in a court of law.