Louis Farrakhan, the controversial leader of the Nation of Islam, on Sunday compared Democratic presidental nomine Hillary Clinton to Hitler over the crime bill that "put tens of thousands of black brothers and sisters in prison.”

“Mrs. Clinton backed the crime bill and then called our young people super predators," the 82-year-old reverend said. "Of course she apologized, but just a minute. See, Hitler could’ve said to the Jews after Auschwitz, ‘I’m so sorry.’ Would that be enough to satisfy you?”

In April, Hillary Clinton said she was sorry for what she described as the unintended consequences of the landmark 1994 crime bill signed into law by her husband. Clinton's past support for the law has come under fire from some African-Americans, who say that it has contributed to mass incarceration of young blacks.

Farrakhan's disapproval of Clinton did not stop there. He said that, while secretary of state, Clinton influenced President Obama in his decision to distance himself from the controversial leader of the Nation of Islam.

“Barack did not want to denounce me,” he said. “But Hillary forced him. And he gave in.”

Farrakhan did not endorse either candidate during a speech Sunday at the Chicago-based movement's headquarters. He did take swipes at Republican nominee Donald Trump over his tax practices but stayed largely focused on Clinton.

“My friends are going to vote for Mrs. Clinton,” he said. “And I’m not mad at them, they see some value in her because they don’t know who she really is.”

Farrakhan criticized Clinton's judgement as secretary of state and brought up some issues dating back to the 2008 campaign. Apparently citing the popular book "Game Change," he recalled the reported interaction between former President Bill Clinton and then-Sen.Ted Kennedy.

Bill Clinton wanted Kennedy to endorse Hillary over Barack Obama, and reportedly told Kennedy, “A few years ago, this guy would have been getting us coffee.” 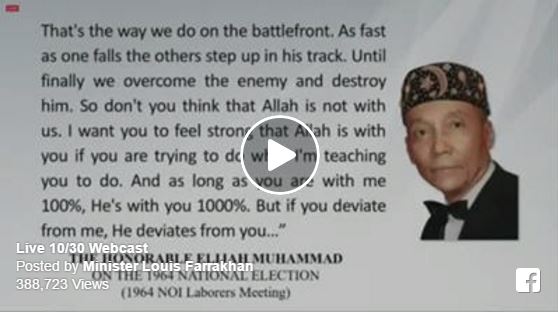 After Kennedy endorsed Obama, Clinton reportedly said, “the only reason you are endorsing him is because he’s black. Let’s just be clear.”

Farrakhan has not been a fan of Clinton in the past. He cited mass “black incarceration” and her use of the term “super predators.” He once asked his congregation if anyone was going to cast a ballot for the first woman president  and he responded, “I do not blame you for wanting a female president, but that’s a wicked woman.” The congregation applauded.

“She can be sweet,” he said. “But so can you. And you know when you’re sweet and playing a game.”

“It was Mrs. Sanger who advocated population control of black and poor people,” Farrakhan said.

“In a 1939 letter, Sanger wrote about getting the black preachers to help with her efforts. She said, ‘we don’t want the word to go out that we want to exterminate the Negro population.’ … And when Mrs. Clinton received the award, [she said] I admire Margaret Sanger enormously. Her courage. Her tenacity. Her vision.’ Now they have to admit that the war on drugs was a war on black people.”