June 01, 2017
Traditional weaponry has often been a burden to soldiers, placing added weight on their bodies, slowing reaction at times when all of their facilities are needed. Future troops may wind up having a “third arm” to help offset the weight.

The Army Research Laboratory is testing a device that attaches to ground troops’ protective vests, potentially letting Soldiers’ hands be freed up for other tasks.

NFL PLAYERS AND COMBAT VETERANS JOIN FORCES TO SAVE LIVES

"We're looking at a new way for the Soldier to interface with the weapon," Zac Wingard, a mechanical engineer for the lab's Weapons and Materials Research Directorate told the U.S. Army's website. "It is not a product; it is simply a way to study how far we can push the ballistic performance of future weapons without increasing Soldier burden." 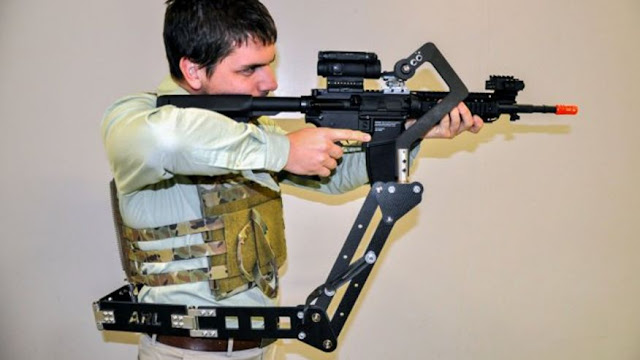 The goal of the device would put all of the weight on a soldier’s body, allowing them to potentially have a more lethal weapon, perhaps adding as much as 20 pounds to their traditional combat load of more than 110 pounds, while not adding any burden.

"With this configuration right now, we can go up to 20 pounds and take all of that weight off of the arms," added Dan Baechle, a mechanical engineer.

The device is made out of carbon fiber composite and it can be used in the prone position on either side of a soldier’s body. It could also improve accuracy and potentially help soldiers deal with recoil, but further testing is needed.

Currently, researchers are using an M4 carbine to test the device, but other weapons, such as a M249 squad automatic weapon or M240B machine gun may also be tested.