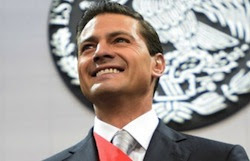 Mexico President Enrique Peña Nieto
Mexico President Enrique Peña Nieto touted security accomplishments in his State of Union speech. Some of his claims need some serious scrutiny.
Mexico President Enrique Peña Nieto's state-of-the-union address
In his third State of the Union address the President acknowledged the last 12 months have been a "difficult year" for Mexico. He spoke of the 43 students disappeared in Iguala, Sinaloa Cartel leader Joaquin "Chapo" Guzman's escape from prison and accusations of corruption at many levels of government, including the Executive Branch.
"These situations are all very different from each other, but they all hurt the spirit of the Mexican people and their trust in public institutions," Peña Nieto said.
Defending his leadership through all this, the President presented a series of figures as proof of crime and security accomplishments. They included falling homicide andkidnapping rates and some of the lowest crime statistics in 17 years.
Additionally Peña Nieto highlighted the capture of 92 figures on Mexico's 122 most dangerous people list along with improved coordination and intelligence sharing to combat organized crime.
"We're not just capturing them, we're undermining their organizations and financial capacities," he said.
Looking to the next three years of his term, the President put forth a 10-point plan centered around improving security and the rule of law while also jump starting the economy.

According to Animal Politico, Peña Nieto's claim of the second lowest crime rates in 17 years hinges on comparing two distinct categories of crime: "high impact crime" (mostly consisting of violent crime) vs total crime.
Aside from statistical shenanigans, official crime figures may not reflect the facts on the ground, as evidenced by a recent Mexico victimization survey, known as Envipe, which pointed to large differences in the amount of crimes occurring and the number reported to authorities.
If crimes do reach authorities there's no guarantee they'll be handled properly, according to a separate report by Animal Politico. Two out of three Mexican states reportedly had to revise their crime statistics this year. Some of the more egregious cases coincided with Mexico's major crime hotspots. For example, in May Sinaloa state announced it would add more than 10,000 preliminary investigations which had somehow not been registered over the last three years. Meanwhile in Atlantic-facing Veracruz state authorities admitted to failing to register nearly 300 homicides in 2013.
Further complicating the matter are Mexico's issues with forced disappearances. In February the Mexican government took issue with a United Nations report which statedforced disappearances (often involving security forces) are widespread and met with near total impunity. Many of these victims ended up in mass graves in which identifying the victim, and thus recording a crime, becomes difficult.
Looking at the President's boast of capturing 92 of Mexico's 122 most dangerous people, it's worth noting that a number of those arrested were reportedly caught during the previous administration.
The list itself has also been called into question after Mexico's Attorney General's Officeremoved 10 names from it. Those removed included Sinaloa cartel underboss Juan Jose Esparragoza, alias “El Azul,” and Juarez cartel leader Juan Pablo Ledezma.
With Mexico's economy stagnating and Peña Nieto's approval rating at an all time low, it's to be expected the President would try and spin crime and security statistics in his favor. What is of real concern is his plans for the next half of his presidency.
The President's recent appointment of Renato Sales as Mexico's new national security commissioner raises doubts. Outlining his agenda Sales put forth prison reform and increasing trust in Mexico's Federal Police as top priorities. This leaves open questions on how Peña Nieto's administration plans to make gains against Mexico's fragmenting and evolving organized crime groups which may not be as susceptible to Mexico's previous strategy of targeting criminal leaders.